Really kind of neat. Seems like they shouldn't start the engines and rev them all the way up, but I guess it didn't matter.......


The engines power a vertical drive unit that spins the jet engines up to ignition speed.


These engines were commonly found in the Buick Wildcats in the early to mid 60s...... 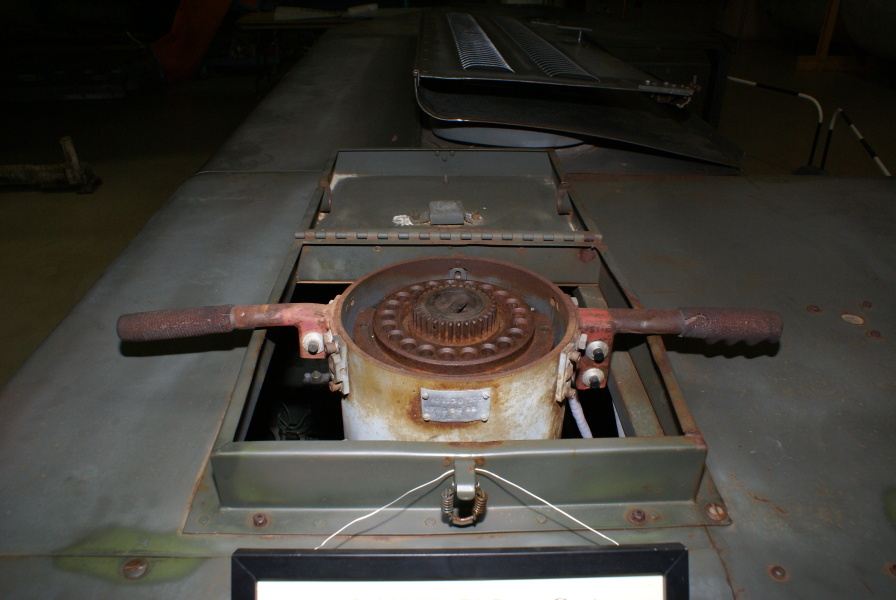 What an amazing machine. 3200 miles on a tank of fuel how big is the fuel tank?
Top

In 1962 the Wildcat was a Buick Invicta subseries, mating the Invicta's longer full-size two-door hardtop Buick body (known as the "sport coupe," body production code 4647) with a high-performance 325 hp (242 kW) version of the 401 cu in (7 l) Nailhead V8, known as the Wildcat 445 for producing 445 lbÂ·ft (603 NÂ·m) of torque. To further distance itself from the Invicta, the Wildcat had Electra 225-like taillights, a bucket seat interior, a center console with tachometer and transmission shifter. It had the famous Dynaflow transmission shared by all full-size Buicks, plus special exterior side trim, vinyl-covered roof (new for 1962), and its own unique emblem: a stylized head of a wild cat, located on each of the C-pillars. However, the Wildcat did share the LeSabre's and Invicta's trio of VentiPorts on the front fenders, a design cue lasting only through the 1963 model year.

From 1963 to 1970 the Wildcat was its own series, no longer a subseries of the Invicta. The 1963 model had a large aluminum trim panel on the side of the body that seemed to compete directly with the Oldsmobile Starfire, another full-size "sporty" model by GM. Wildcats built in the 1964 model year did not have the traditional horizontal VentiPorts like other Buicks, but instead had vertically situated chrome hash-marks on the lower front quarter panel directly behind the front wheel housings. After becoming its own full series in 1963, the Wildcat added a convertible and four-door hardtop sedan to the original two-door hardtop coupe introduced in 1962. In the four-door version, a bench seat was standard but the bucket seat and console interior used in the coupe and convertible were optional. In 1964, a pillared four-door sedan was added to the line and two levels of trim were available - standard and Custom, with a mid-line Deluxe sub-series added for 1965 only. From 1966 to 1969, the base (with trim similar to the '65 Wildcat Deluxe) and Custom trims were again the sole options.
The 325 hp (242 kW) 401 cubic-inch Wildcat V8 remained the standard engine through 1966. From 1964 to 1966 a larger 425 cubic-inch Wildcat V8 was also available, producing either 340 hp (254 kW) with a factory four-barrel carburetor or 360 hp (268 kW) with two four-barrel carburetors ("dual quads"). This version also featured finned cast aluminum valve covers with the Buick logo embossed on the top. Also beginning in 1964, a three-speed manual transmission with column shift became standard equipment on all Wildcats, with either the four-speed manual (1963-65 only) or three-speed automatic Super Turbine 400 transmissions as options. Interestingly, engine names referred to engine torque output rather than displacement. The "Wildcat 445" was a 401 CID V8 that produced a peak torque rating of 445 lbÂ·ft (603 NÂ·m), while the "Wildcat 465" was a 425 CID V8 that produced 465 lbÂ·ft (630 NÂ·m) of torque. The "dual quad" version of the Wildcat 465 was dubbed "Super Wildcat."

The later start carts were 454 chebbys. Early versions were buicks. There was also an injection of a fluid that spontaneously combusts when exposed to the atmosphere to get the engines started. The plane held a canister of this stuff, good for a few restarts if needed while airborne.

There are some excellent stories online about this aircraft, particularly the ones written by the crew chief who went through the process of getting some of them reactivated after the first shut down.
Top

saturnstyl wrote: There was also an injection of a fluid that spontaneously combusts when exposed to the atmosphere to get the engines started. The plane held a canister of this stuff, good for a few restarts if needed while airborne.

Man, I'd hate to be in that at speed and have an engine flame out. How would it not yaw out of control and come apart?
Top

I'd hate flying too high even more. As I understand it the plane was capable of going beyond having enough air on the wings to control direction, so it was possible for the plane to go into orbit. If this happened, there was supposed to be a lever that would evacuate all air in the plane to space, killing the pilot. Eventually, the plane would reenter and burn up but not until long after the pilot would have died from lack of oxygen.
Top

Sandiego air museum has an A12 out front.
Top

here are some links on the XB-70

I know we try to limit the politics here, but I just have to say, the death of America began in the 1960s with the rise of the American Liberal, and we will remain in a death spiral until we can get the American liberal out of politics, journalism and education.
Top

Everytime the engine was started, or the afterburner was engaged, each engine needed a shot of TEB (triethylboron) was required. TEB ignites with a greenish colour, and each engine was loaded with 16 "shots" of TEB. During engine starts, at least 2 "shots" were required.

SR-71's launched with little fuel in the tanks(in order to ease loads on the tires, landing gear, in case of an engine failure, ensuring that the SR-71 could still take-off on one engine).

The SR-71 leaked more fuel when it was cold-and leaked less when at operating temperature after the heating of supersonic flight slowed the rate of leaking down to about 10 lb/hr, which would be unacceptable in any other application, but when your plane burns fuel at a rate of 60,000 lb/hr or 0.016% and flies 2 times faster than a .44 Magnum bullet.(3227 fps for SR-71 and I
Sufficed to say, in-flight refueling was required just after takeoff.

The afterburners were shut off in order to slow down for the in-flight refueling tanker, the plane refuels, then once clear, the pilot hits the afterburners again, which again requires 1 shot of TEB in order to ignite the JP-7 fuel. During supersonic flight, the SR-71 needed to find a tanker every 90 minutes.
The KC-35Q was used for SR-71 refueling. It had tanks which kept the KC-35's fuel which was JP-4(which the KC's engines burned) separate from the SR-71's JP-7 fuel.

So 2 shots at startup,
1 shot minutes after takeoff
1 shot after another in-flight refueling,

The flight/mission duration was limited by the TEB capacity, and of course pilot endurance.

Here is the right engine, with its "spike" which moves in and out depending on Mach number.

This diagram illustrates how the spike retracts inward as Mach number increases, this changes the point at which the shock wave created by the spike enters the engine

At top speed, the actual turbine blades remain at 100% rpm, but become sources of drag as all air is bypassed directly into the afterburner section. The determinant of engine output becomes inlet air temperature, which was not certified beyond 800ÂºF. That is inlet air temp, the heat is created solely as the air is compressed by ramming into the engine, the fuel has NOT been added yet. When the fuel is added, the temps rise to over 3,200ÂºF. Very similar temps to which the hottest parts of the Space Shuttle experienced during it's re-entry into the Earth's atmosphere at speeds of Mach 25 (18,000mph).

Here is a J-58 engine on full afterburner showing the Mach diamonds in its exhaust. This picture was taken at a Pratt & Whitney lab and this run was performed mainly to burn up the remaining JP-7 fuel before the SR-71 program was cancelled.

Here is a pic of a bunch of Lockheed A-12's built for the CIA mothballed at Palmdale.

And finally the last of the group, the Lockheed YF-12 which was designed to be the missile carrying Interceptor variant.